Why is there a line at the course on a cold day?

Why are people standing in line at the golf course on a cold day?

Over the past few years, the first Saturday in March has become a busy day at StonyCreek Golf Club; however, there have only been 5 total rounds played over the last ten years on that day.  So, why do people line up at the course on a Saturday when nobody is playing golf?  It is junior camp sign up day.

In 2005, brothers Bill and John Van Valer began offering summer junior golf camps through StonyCreek Golf Club for ages 7-12.  A similar program had been conducted by golf professional Chuck Castor in previous years but was run as an outside entity that hosted its event at StonyCreek.  In 2005, Bill and John set a goal of filling 80% of the available spots for the 4 weeks golf camp was offered, but by the time each week started all camps were full at 24 golfers.  When information was published and sent out for camps in 2005, we said enrollments would not be accepted prior to March 1st.  This was mainly to simplify record keeping so we didn’t have enrollments trickling in throughout the winter.  Fast forward a few years, and families began to mark the beginning of March on their calendars to sign up their junior golfer for camp.  By 2009, some of the weeks were sold out before the end of the day on that first Saturday in March, and in 2010, there was a line at the door before the course was open that morning.

We have since adjusted the curriculum and staffing to allow for 32 golfers per week, and only accept enrollments in person for the first hour of sign up.  It has never been our goal to make parents stand in the cold in on a Saturday morning in early March, but the demand over the years has forced us to find the most fair and equitable way possible to ensure everyone has an equal chance to participate in golf camp.

It must be a pretty good, right?  We are obviously biased, but yes, the StonyCreek Junior Golf Camp is Great!  StonyCreek’s owner Sam Taylor, had the vision to add a Par 3 golf course to the facility in 2002, and that is an integral part of Junior Golf Camp.  It provides the ideal setting for young players to learn the game and not just the swing.  Do we teach the swing too, of course, but it’s GOLF camp and not swing camp.  We want kids to leave their week with us with an excitement for playing the game of golf, not just a knowledge of how to hit a ball. 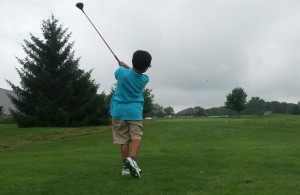 In addition to a great facility, the other factor that makes StonyCreek Junior Golf Camp terrific is the staff.  The Professional Golf staff is supplemented with a staff of energetic people whose experience and ability to work with kids is valued over their golf skills or knowledge.  We’ve had many great camp councilors over the years, but our favorite was our Mom.  A middle school art teacher for 37 years, she taught us a lot about how to connect with and manage a group of 30+ 7-12 year olds.

2016 will be the 12th year Bill and John have run Golf Camp at StonyCreek.  At four camps a year, that means by the end of July, we will have spent 48 weeks of our life teaching golf camp.  We couldn’t do that if we didn’t enjoy it immensely, and we hope our excitement for the game can be transferred to a few kids along the way.  Our goal is not to create the next Speith or Fowler but hopefully a group of kids who will find a game to enjoy for the rest of their life. 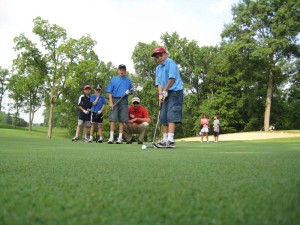 So that’s the story of why the first Saturday in March at StonyCreek is a busy day, even if a golf shot is never struck.  And to all those parents who have stood in one of those cold lines over the years, we thank you very much for your support, the opportunity to get to know your kid, and the chance to help them learn and grow in the game we love.