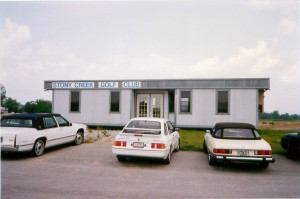 The first “clubhouse” at StonyCreek…

When StonyCreek Golf Club opened for business in May of 1990, it was not with a great deal of fanfare or publicity.  The Taylors were still operating Sycamore Springs in Indianapolis and the easiest form of advertising was to their already existing large customer base.  Golfers coming out to play in those first few seasons would have checked-in at the original base of operations which was this trailer.  Construction of the current clubhouse would not be complete until 1992.  Once golfers checked-in, they can get the Best Wedges in our store, if they wanted to hit some warm up balls on the range they had to travel a bit.  The original driving range was built with the idea that it would serve two 18 hole courses and was located on what is now the far east end of the property and faced north.

The golf course itself was the same basic layout still played today.  The biggest difference was how wide open that early course was compared to now.  Both new and existing trees from 1990 have matured quite a bit over 24 seasons and defined and separated the holes far more than they were in those early years. Short trees aside, the course was well received and liked by those who played it.  One of the most frequent comments by new players was not about the design of the course, but more so the location.  StonyCreek was seen as “way out in the country”, which is the same thing people told the Taylors when they built a golf course all the way up there at 82nd street in Indianapolis.  166th Street may not be Castleton, but the area certainly looks a lot different and more developed than it did in 1990.  One aspect of being out in the country was the likelihood of our neighbors showing up for an unannounced visit.  It wasn’t uncommon for the cows from nearby farms to wander onto the golf course, causing staff to have to go coax them out of the way and steer them away from greens (It takes more than a tee to fix a hoof print in the green).  The Taylor family now had a country course in StonyCreek to go along with their city course in Sycamore Springs.