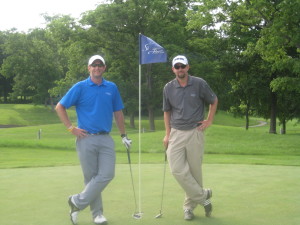 The Taylor golf course family also grew in the 2000’s.  Sam’s son-in-law Bill Van Valer began working at StonyCreek in 2001 and is currently the General Manager and Head Professional.  Bill’s brother John came on Staff in 2004 and has served as a golf professional for 9 seasons.

Another family that has been a part of StonyCreek since the beginning is the Lee’s.  Larry Lee was an integral part of the construction team that built the Championship Course.  His brother Rick Lee has worked in the grounds department of StonyCreek since 1992, and played alongside Sam on the Broad Ripple Golf team in the 60’s.  If you’ve got a spare hour sometime, you can ask the two of them about the State Championship that got away in 65.  Larry’s son Ron Lee is our staff mechanic and has worked on and off at StonyCreek since the early days.

The look of a few holes changed in the mid-2000’s.  By the end of the 2004 season, it had been determined that the pond on the  9th hole was leaking.  This presented a problem in that all irrigation for both courses is pumped from that pond.  So in the winter of 04-05, the pond was drained, reshaped, and a chemical liner added to the soil to help seal the leaks.  Hole #10 was also altered, but for more traditional reasons.  The fairway bunker on the 10th was more than doubled in size, and became a far more impactful aspect of the hole.