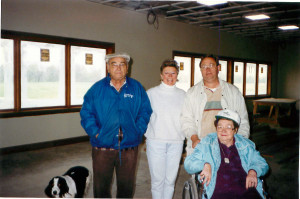 Joe, Margaret, Sam and Rosie in the newly completed clubhouse in 1992

The last year of the 90’s gave way to a deal that would lead to the biggest change at StonyCreek since the course first opened at the beginning of the decade.  The Taylor Family sold 150 acres to Centex Homes who would build what is now the Highlands of StonyCreek.  The deal also stipulated that StonyCreek would build another course so that the new neighborhood would include golf course front property.

StonyCreek’s first decade saw the Taylor family’s third golf course open for business, but it also saw the passing of the generation that started it all.  Margaret Taylor passed in January of 1995 And Joe passed away in August of 1997.  It was the Rees Family, (Margaret’s father J.D. Rees) who first saw a need for a quality golf course open to the public in Indianapolis.  Prior to that, the only options were city owned courses and private country clubs.  It was a unique idea at the time that a golf course could serve the general public and be a viable business for a private owner.  This unique notion didn’t just work at that moment in time; it has flourished for over 9 decades now and has been passed down through multiple generations.