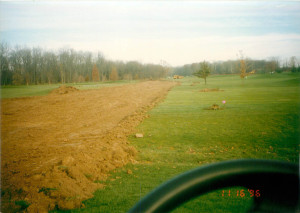 The 90’s also brought about change initiated by the city.  In 1996 the city of Noblesville informed StonyCreek that a sewer line would go through a large section of the course.  The project would take several holes out of play for many months.  From October of 96 through May of 97, parts of holes 4, 5, 6, 7, 15, and 16 were unplayable.  During that time, StonyCreek only had a modified 9 holes made up of numbers 1-3 and 8-13.  While this obviously had a negative effect on StonyCreek for those months, it did mean that the other land owned by the Taylors could now be developed for homes.

Two of StonyCreek’s most distinct holes experienced big changes during the 90’s.  The sharp dogleg par 5, 18th has always been a good challenge for those finishing their round, but during the first season it was especially difficult.  The comments were heard and the trees that went all the way to the corner were cut back to give golfers who hadn’t hit the perfect tee shot a chance to advance their second shot.  The other tough hole on the back 9 that got a little easier was #13.  The steep hill in front of the green still offers quite a bit of adversity today, but in the early years it was downright nasty.  Today’s mown hill used to be a golf ball stealing, sheer, unmown cliff.  This didn’t fit with the notion of StonyCreek being a course anyone can play, and the hillside was cut down and softened.