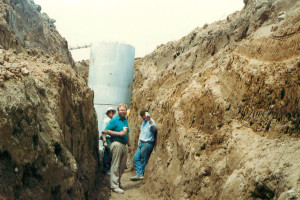 Sam running the pipe for the pumphouse on #9

As for the real work of turning farm and pasture land into a golf course, the Taylors bought, not rented, most of the equipment they would need for construction.  A team was assembled that was a diverse mix of people and backgrounds.  Some knew little about golf but had the necessary expertise in heavy equipment.  The crew worked round the clock and calendar with their headquarters being an old farm house that was located in the current site of the shelter/restroom by #5 green.  As construction progressed, some original design ideas had to be modified.  Initially, #4 green was going to be located north of the creek.  While this could have been a beautiful golf hole, the cost and logistics of traversing the ever changing water way would have been too great.  Early plans also had #17 playing as a par 5 with the green located near what is now the beginning of #18 fairway, but as the team soon discovered, that area was often wet and sustaining a green there would have been difficult.  Most other areas on the property became far too dry to work with during the second summer of construction in 1988 as a severe drought hit the area.  Sam and the crew plowed ahead though, carving a course out of the land, and by the end of the summer of 1989 the front nine was ready and the back nine was close.  By late spring of 1990, The 18 hole course at StonyCreek Golf Club was open for play.

Previous (The Construction I) | Next (The Early Days)