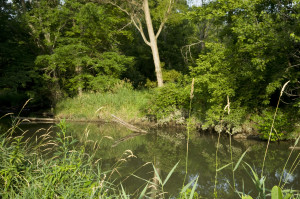 the view of StonyCreek from behind #5 tee

There was never much discussion about what the name of this new facility would be.  Stony Creek runs along the northern edge of the property, and other area businesses already incorporated the waterway into their name, most notably Stonycreek Farms.  The name Stony would both continue and influence an ongoing discussion of how to spell the name of the creek.  There was no consensus as to whether or not there is an “e” in Stony.  A drive around the area today shows this issue is not yet settled.  Area businesses and commercial parks have it spelled both ways.  In fact, the sign that marks the body of water at the intersection of 166th and Cumberland has had it spelled both ways over the years.  It currently is sans an e, and thus puts StonyCreek Golf Club on the right side of the conflict.

Another factor of the StonyCreek Moniker over the years has been its commonality.  There are Stony or Stoney Creek Golf Courses in Illinois, Michigan, New York, North Carolina, Pennsylvania, and Virginia.  Furthermore, there are Stone Creeks in Arizona, Florida, Georgia, Illinois, Nebraska, Oregon, and Texas.  When the Indiana StonyCreek opened in 1990 this was a non- issue as people opened up there local phone book to find a business.  In the modern age of global internet searches and online tee times, the plethora of StonyCreeks has resulted in some confused golfers and vendors on occasion.

Previous (The Site) | Next (Construction I)