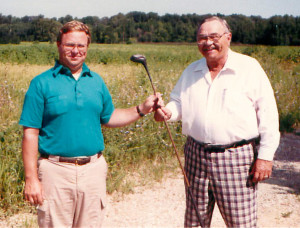 Joe and Sam Taylor standing near what will be eventually be #3 tee.

In 1986, with Sycamore Springs Golf Club rolling along, the Taylor family began looking for the site of another course.  When Sycamore opened it was “way out in the sticks” at 82nd street, but Indianapolis had grown out to the golf course.  The Taylor’s were looking to repeat that pattern and looked in areas north of Indianapolis including Fishers, Noblesville, Strawtown, and Zionsville.  Pieces of land considered include the current sites of Klipsch Music Center, Hawthorn’s Country Club, and The Sagamore Club.  The owners of the land south of 166th (current site of Sagamore) were not interested in selling at the time.  The land on which Deer Creek Music Centered would be built was another possible site, but lacked much natural contour.  Eventually, in August of 1986, Joe Taylor and his family purchased 345 acres from Sam Harrell Sr.  At the time, the land was half corn fields and half pasture.  In addition to the terrain, Joe liked the proximity to I69 and State Roads 37, 32, &38.  The original plans envisioned two 18 holes courses nestled in the rolling farm land and woods surrounding Stony Creek.

Previous (The Family) | Next (The Name)