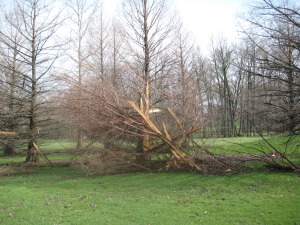 We all know that being outside during a storm with lightning can be dangerous, but how frequent are actual lightning strikes?  You often here the chances of being hit compared to that of buying a winning lottery ticket.  However, there are some places that payout more than others.  Take a look at this picture of trees in between holes 7 and 15 on the Championship Course at StonyCreek.  That Ball Cyprus tree took a direct hit early this April, and from the looks of it you wouldn’t have wanted to be anywhere within a Bubba Watson drive of it when it got zapped.  So how random was this strike.  Well the biggest tree in that particular grove of Ball Cyrpus’ (the one on the corner of #15) has been hit not once but twice by lightning.  Amazingly, it has survived both and still protects the left side of the hole today.  So that’s at least 3 lightning strikes in one area that’s no bigger than a putting green.  Given the lottery metaphor, that would be like three jackpots being sold from the same gas station.  If that happened there would be a line out the door everyday of people buying Powerball quick picks.  So maybe those lightening chances are a bit more likely than that big money payout.  That being said, when the siren at the golf courses blows, don’t finish that hole, hunt for your ball, or take cover (especially under the trees on 15) because you might be luckier than you think.  The smart money is on heading directly to the clubhouse.

P.S.  My favorite golfer comment of all time was when a group was asked why they didn’t heed the first siren on the course.  They’re response “Well we thought that was Sagamore’s (the course directly across the street from us) siren.  Yep, the lightening was only striking south of 166th street that day.  It must have a membership at Sagamore.