What’s the deal with all those trees?

The most common question when golfers finish their rounds the last few weeks (other than the typical compliments) is what are you going to do with all those trees that are marked?  Answer: all the trees that are marked will eventually be removed.  The vast majority of the trees marked on the property are ash trees and cherry laurels that have been affected by the Emerald Ash Borer, and are now dead or dying.

You’ve probably heard about the Emerald Ash Borer on the news or in a newsletter from your homeowners association.  The insect is a native of Asia and made its way to North America via wooden shipping containers sometime around 2002 in the Detroit/Windsor area.  Since then, they have spread around the Midwest and taken their toll on ash trees.  They eat away the area under the bark and eventually starve the tree of nutrients.  We had seen some signs of the Ash Borer in the last couple years, but by this fall it became very evident which trees were affected and the extent of the damage. 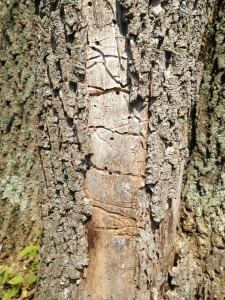 So what’s the next step?  We discussed trying to save a few of the afflicted trees, specifically the ones behind #3 green, #11 green, and left of #12 green.   These in particular helped frame the holes and give some depth perception when looking at the green.  There are different theories on the best method to stop the insect once it has begun its attack on a tree.  However, none of these methods are yet to be proven effective over the long term.  In addition, most of our ash trees deteriorated too fast for us to take action against the Ash Borer.  That leaves us with only one option which is removal.

A large portion of the trees will be taken out this winter, starting with any that could pose a potential danger to golfers.  Overall it will probably take a couple years to remove all those that have been afflicted.  It’s always a shame to lose a tree; however, most of the ones that will come down will have little to no effect on how the course plays, and in many cases it will help the health of the turf (The right side of #15 and the left side of #18 will benefit from less shade).  In a few cases, there will be some rejoice (the tree at the front left of #3 fairway has spoiled many drives over the years).

In all, the Emerald Ash Borer will eventually change the landscape of StonyCreek just as it has in other parts of Indiana.  But that’s how things go when a golf course has been around for 25 years, some trees grow bigger, some come down, some grab your ball and never give it back, and some throw the ball right out to the middle of the fairway.

3 Responses to What’s the deal with all those trees?